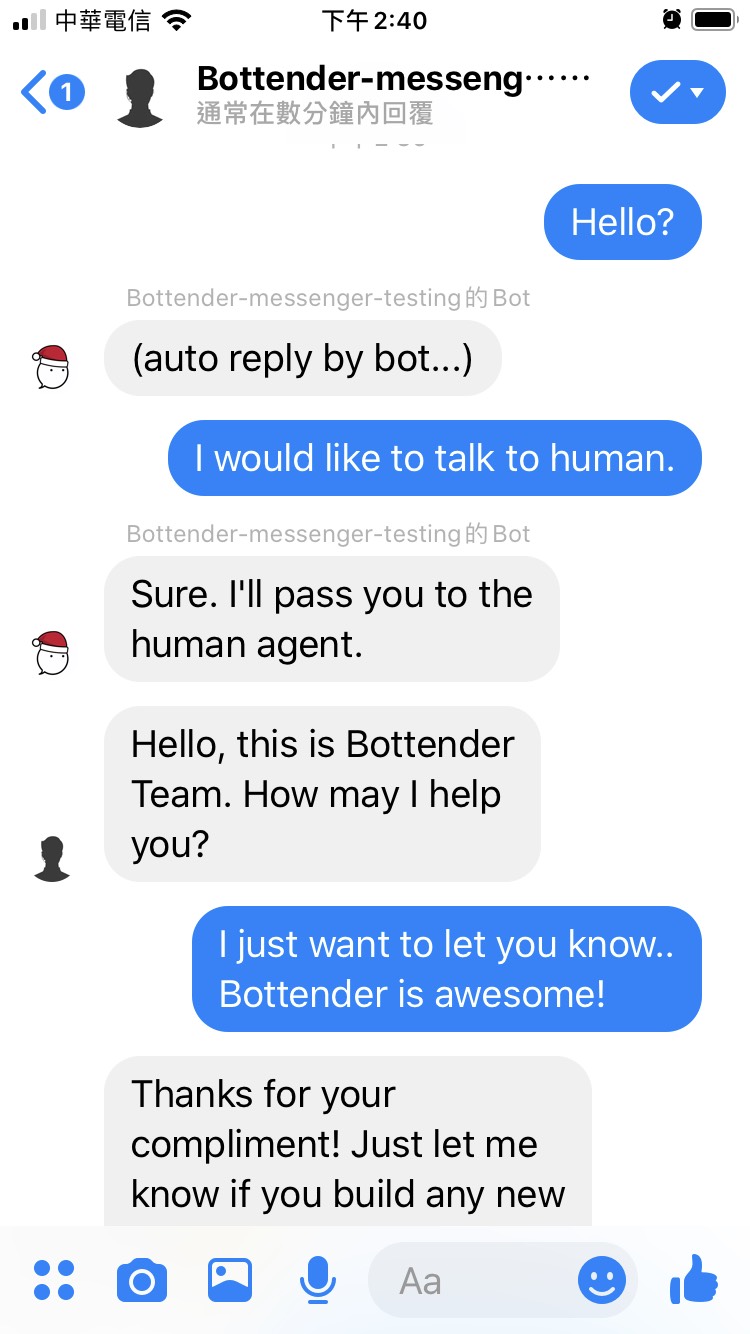 Since Messenger has become a critical customer support channel between brands and customers, the cooperation between Messenger Bots and human agents creates a complete customer journey on messaging business.

Thread Control: Who is Answering the Customer

Among all the apps behind the Facebook Page, only a single app could be Primary Receiver, the rest are Secondary Receivers.

You, or the Facebook Page admin, can change the app role, i,e, which app is the Primary Receiver at the Page Settings.

The default setting of App roles is a bit mysterious. It is like no app is Primary Receiver. We would suggest you check your app role settings and assign Bottender's app as the Primary Receiver to manage the Thread Control. 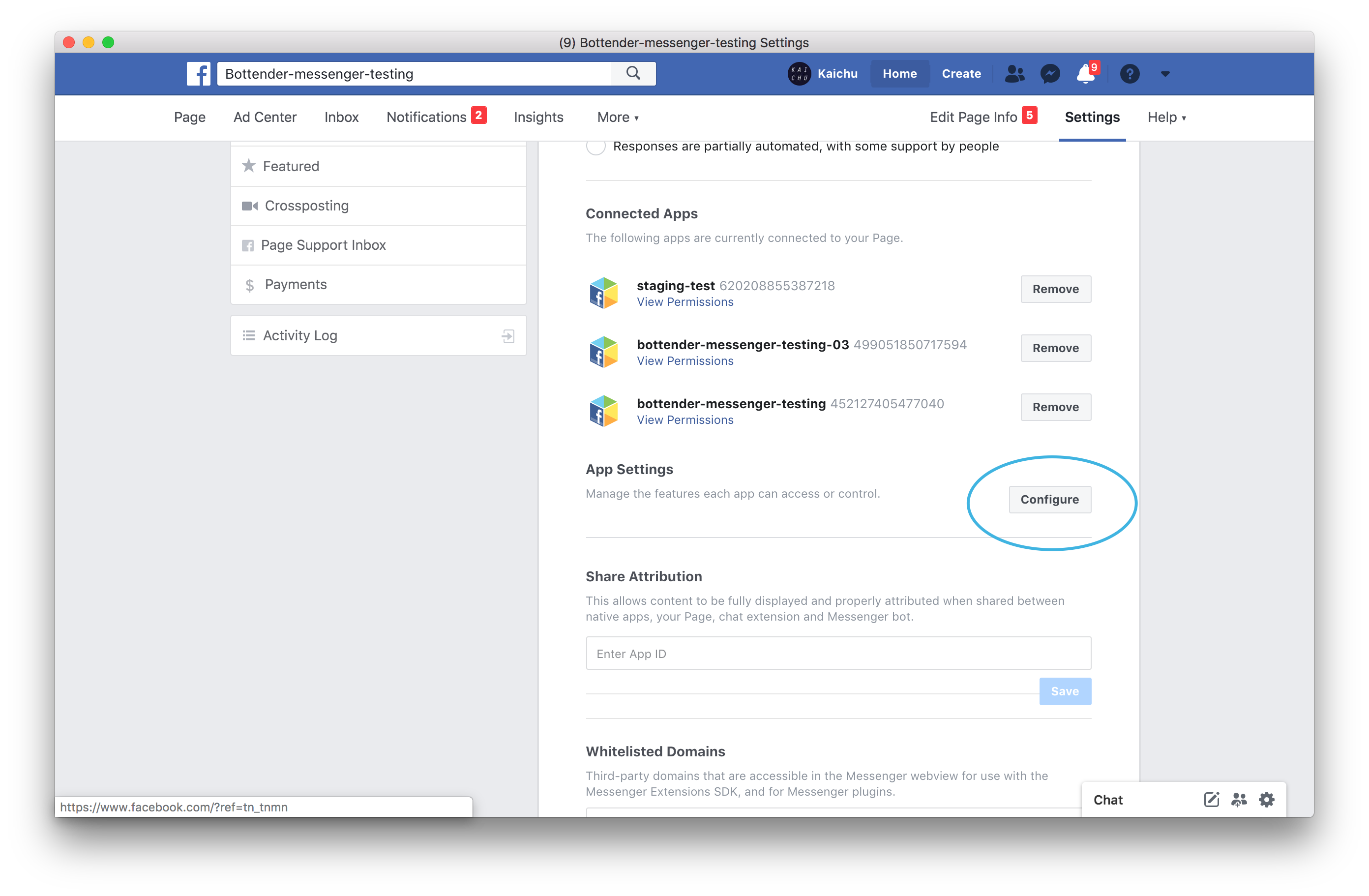 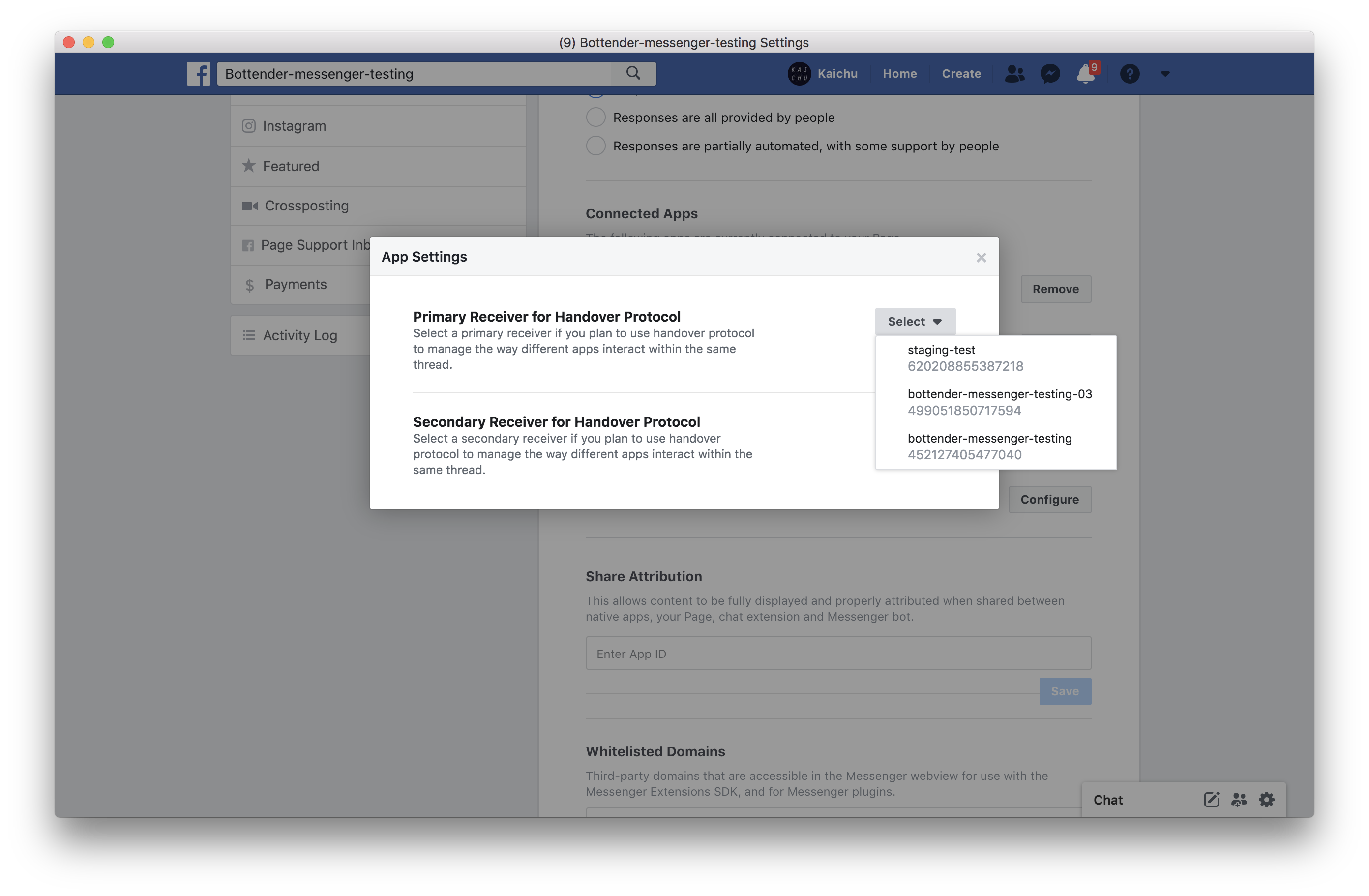 In the following table, you can see the difference in capability between Primary Receiver and Secondary Receiver.

The Pass Thread Control API allows one app to pass the control of a conversation to another. The calling app can pass optional metadata to the receiving app in the API request. By the pass_thread_control webhook, an app can know if it takes the thread control.

Page Inbox is a unique official app of Facebook. It is the default Facebook app for every Facebook Page to reply to messages by human agents. 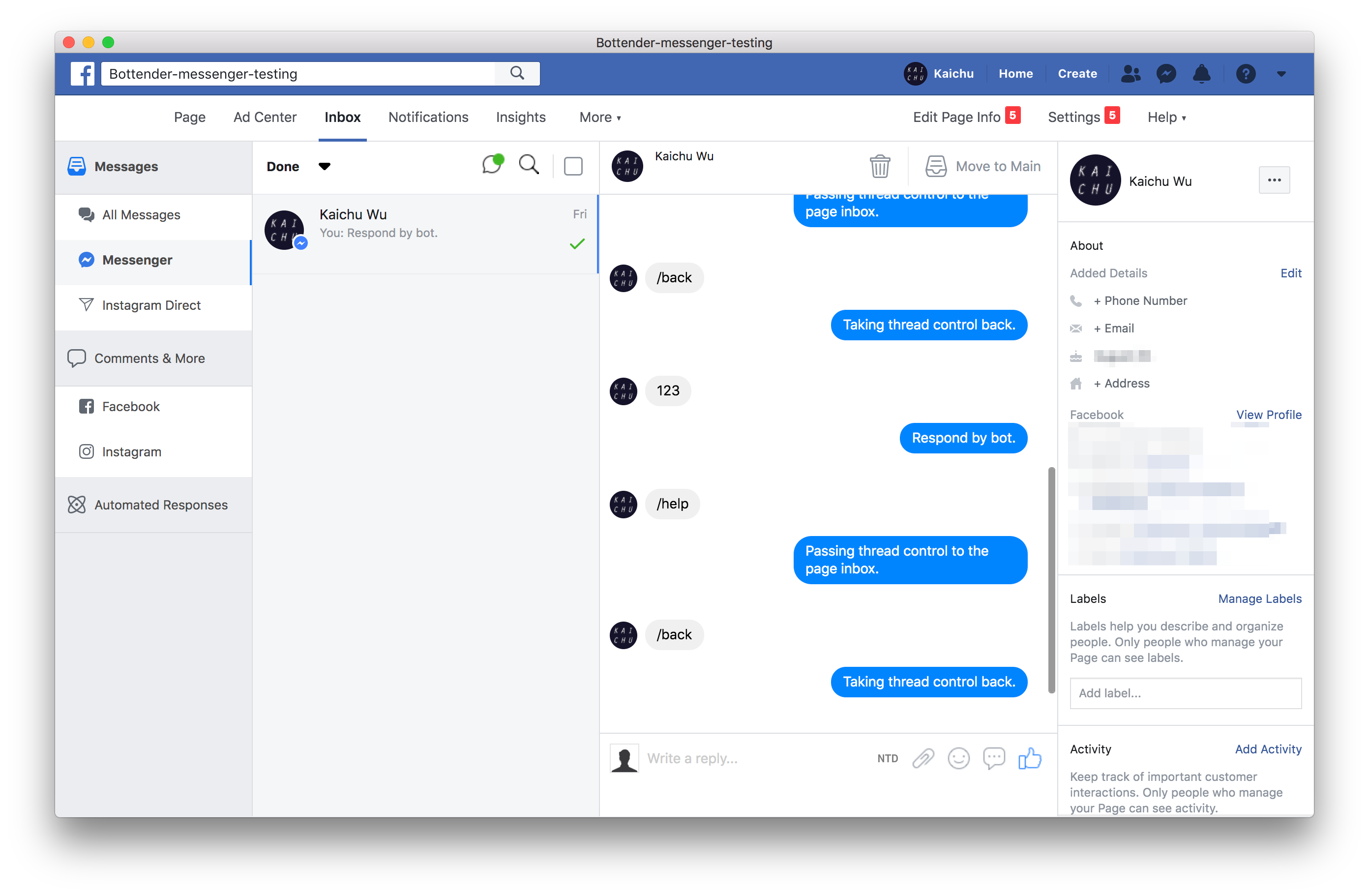 Page Inbox has three default folders: Main, Done, Spam. When you set Page Inbox as Secondary Receiver, all messages sent to your bot appears in the Done folder by default. 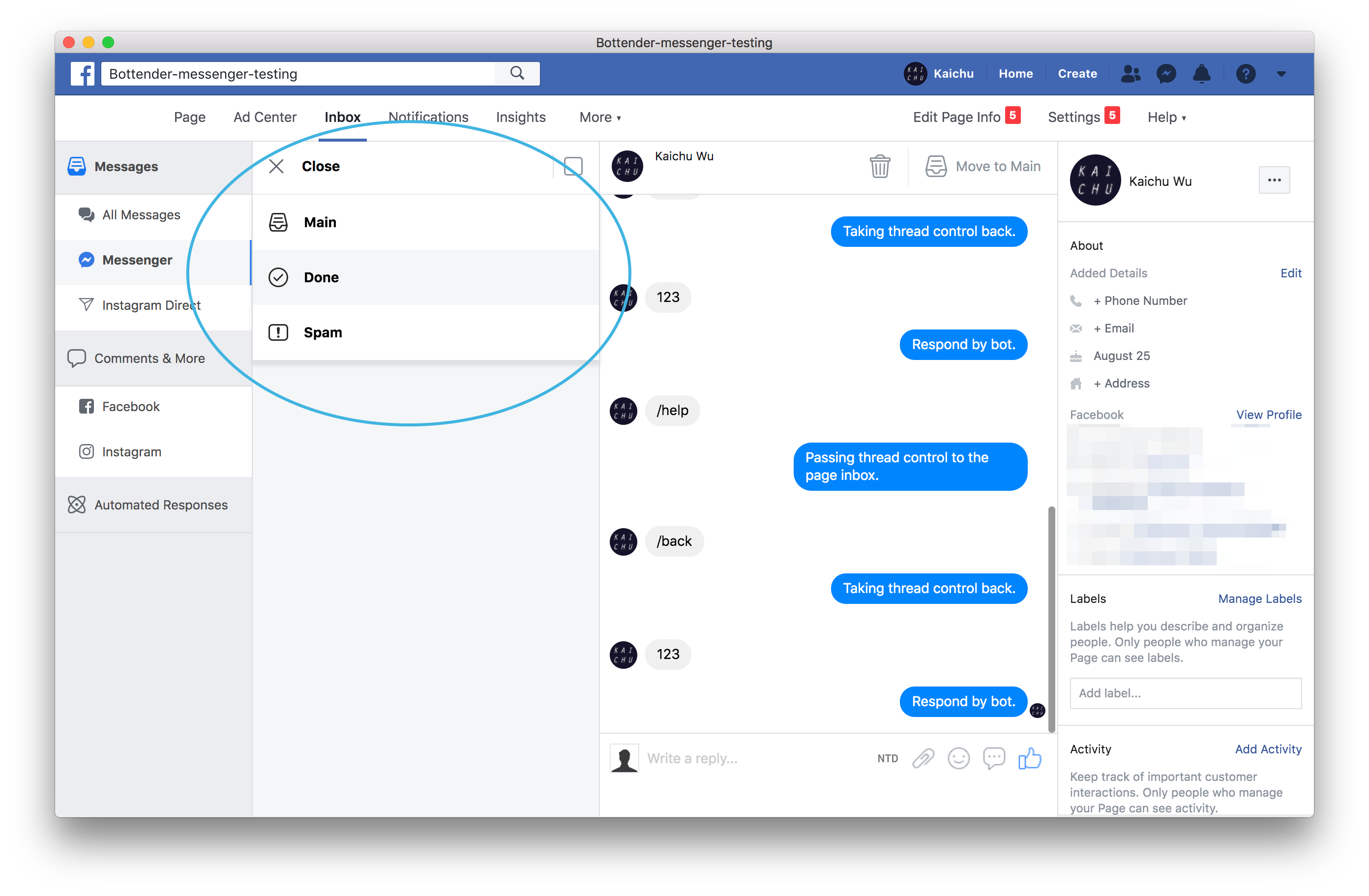 The Secondary Receiver app receives a messaging_handovers webhook event when it loses control of the conversation. The event contains the metadata string.

The Primary Receiver may also ignore the request and do nothing.

Getting the Thread Owner

The following function helps you check which Facebook app owns the Thread Control. It is useful for bots that have complex implementations of the handover protocol, where an app's actions are dependent on whether it currently has thread control.

The Thread Owner API may be called by Primary Receiver and Secondary Receivers.

Bottender offers a handy function, isThreadOwner, to check whether the Facebook App of Bottender code owns the thread. This function uses the appId in bottender.config.js to compare with the current App Id from getThreadOwner. So please make sure you have your appId appropriately set.

By default, no app has been set explicitly as a Primary Receiver. We recommend you to config your Bottender app as the Primary Receiver to avoid any unexpected situations.

In the following section, we would like to highlight a few highly related webhook events. Please make sure you have enable corresponding Page Subscription Fields in your Facebook App Settings. 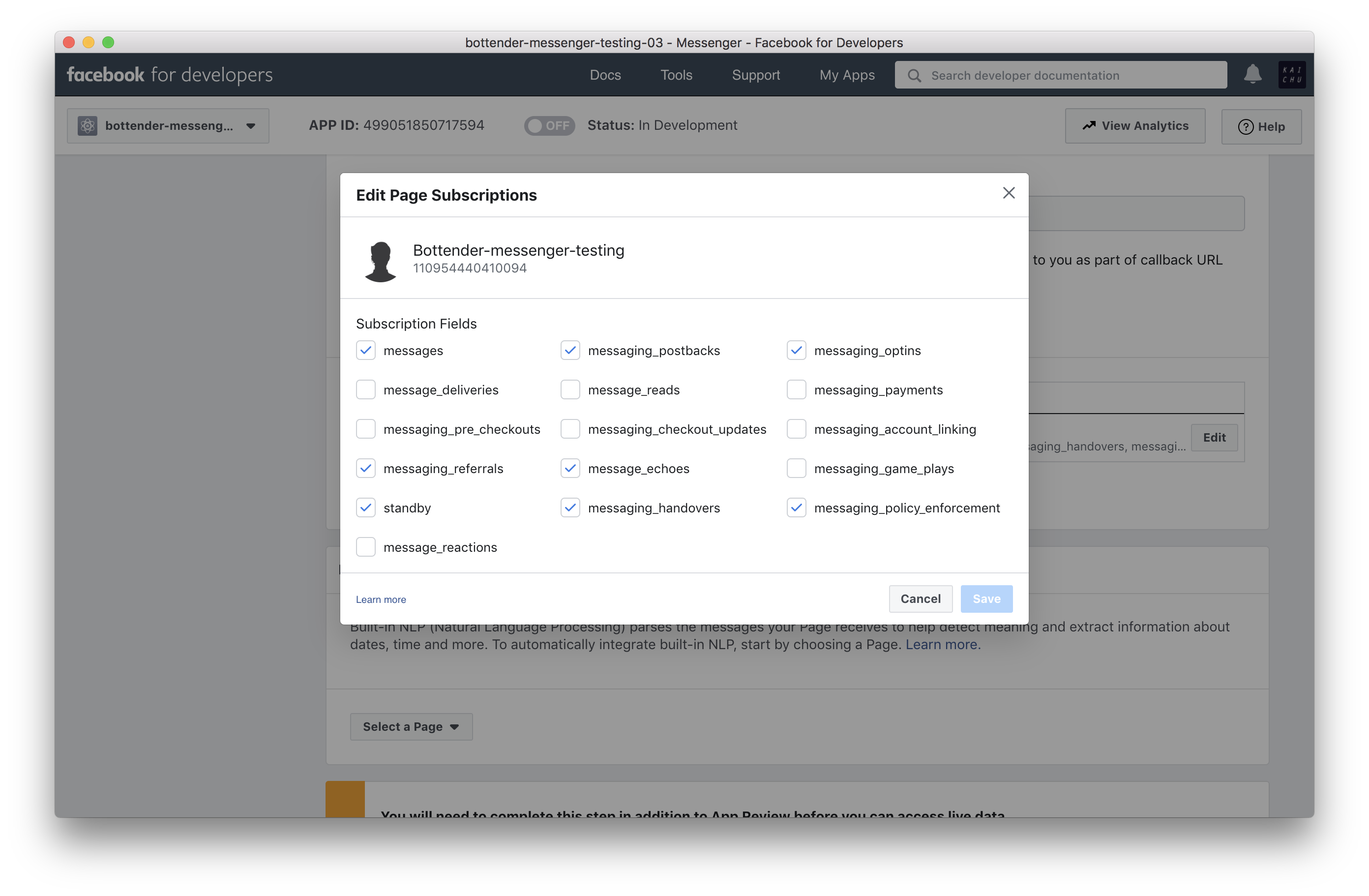 Once a role is assigned, either Primary Receiver or Secondary Receiver app gets an app_role webhook.

The messaging_handovers webhook event notifies an app's webhook when the following actions happen:

For bots using the handover protocol, this callback occurs when a message has been sent to your page, but your app is not the current thread owner.

This callback occurs when a message has been sent by your page.

You can subscribe to this callback by selecting the message_echoes field when setting up your webhook.